DreamHost has been around since all the way back in 1996. Just for some context, other popular hosting companies like Bluehost, Hostgator, and SiteGround were founded in 2003, 2002, and 2004. DreamHost was founded by a group of undergraduate students, and has grown to become one of the top hosting brands in the business for decades. In this DreamHost review we’re going to go over all of the basics that you need to know before signing up for an account from them, along with a bunch of other things you might not have thought of yet.

Since they’ve been around so long, they’ve put together quite a huge userbase. They have nearly half a million active customers, and over a million sites hosting on their platform. That’s staggering. They’ve won many awards over the years, and not all just back in the 1990’s or anything either, they’re still regarded as one of the best big-volume hosting companies out there. They’re not perfect, but they’re also definitely on the more affordable side of things, making them an excellent choice for many different types of sites and projects.

If you need to get a website online, whether it’s for a small business, a club, a personal blog, or what ever else you can dream up – DreamHost can handle it. From affordable shared hosting plans, to more high-end hosting options you can grow into down the road, let’s take a look at their current offerings…

DreamHost has WordPress-specific plans, and then they also have shared plans that you can use to host WordPress, just without the same optimizations or backend. Either will work perfectly fine for running WordPress, but the plans that are specifically geared towards WordPress are a better option if you plan on building your site with WP. Here’s an overview of the WordPress hosting at DreamHost. 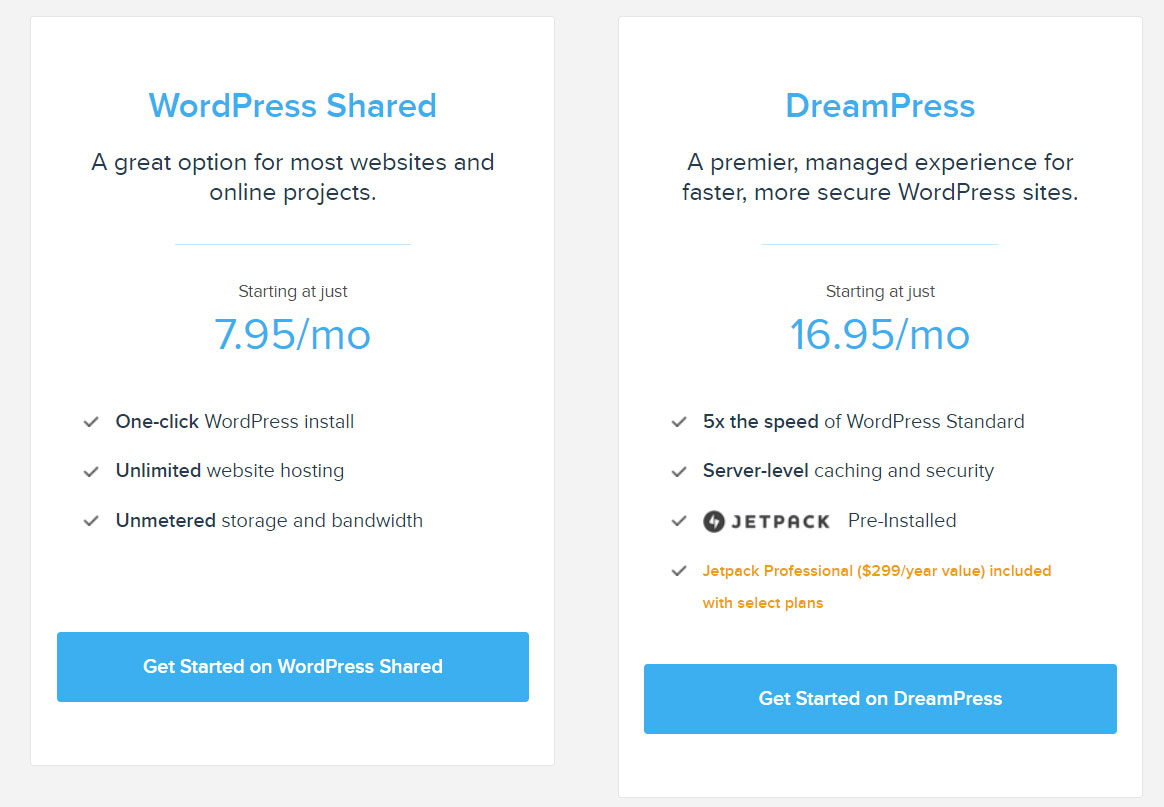 The DreamPress plan is a more complete package, it includes things like additional security and caching to help your site load faster, and it has them at the server-level as opposed to having to do it using WordPress plugins. This means you don’t have to install as many plugins, which means your site will also benefit from speed and security boosts, not only because of the security features and caching, but also because you don’t need additional plugins running for those features, which you would normally have to add separately. It’s a beefier server that’ll have your site running more smoothly, even if a lot of people are trying to load your site at the same time.

Need something more powerful? DreamHost also offers some very affordable VPS (virtual private servers), which is a step-up from shared hosting, and a step-down from dedicated servers (which they also offer).

Their VPS servers are managed, meaning their support staff will help you set it up and keep it running with all of the latest software, updates, and patches, and they’ll also be in your corner if you run into any obstacles.

As for features, DreamHost frankly has everything you would expect from a solid hosting company, they’re in line with all of their top competitors,

5 Reasons Why DreamHost is Great in 2019

There are a lot of reasons to like DreamHost that we’ll highlight in this hosting review, but here are some of the most important ones!

How Is Their Support?

DreamHost’s support is easy to get in touch with, as we mentioned, because you can contact them in a number of different ways. One thing about having a host that’s been around for this long, is they’ve had plenty of years to really perfect the workflow, the training process, and support documentation for all of their customer service and technical support staff members, and it shows.

All of their support staff is based in-house, which is always a good thing because they’re more familiar with the service, and generally in-house support staff are also a lot more dedicated.

Their customer support is handled through your control panel, so when you get in touch they’ll already have some of the basic info so they can start resolving your issues ASAP.

DreamHost has been around for ages, and they’re still going strong. With an emphasis on taking care of their customers with fast support, and running even faster servers, they make a strong choice for anyone who doesn’t want to drop a ton of cash but still wants solid, reliable, and fast webhosting for their blogs, businesses, shops, and more.

Scott Whatley Contributor & Writer
Follow
About the Author Full BIO
"No tears in the writer, no tears in the reader. No surprise in the writer, no surprise in the reader." ― Robert Frost
As a programmer and a geek, Scott always had a passion for servers. This passion has eventually led him to a deep dive into the hosting world for the past few years. Now he shares all the accumulated knowledge with all of our readers through detailed reviews, comparisons, and guides. His only purpose is to help users make the right choice for their websites, with no exceptions.
Related Posts
See all
Hosting Reviews

Bluehost Basic vs. Plus

Need Personal
Hosting Advice?
Speak with our experts ⟶
!
Advertiser Disclosure
MamboServer.com is a review website that aims to provide informative and well-researched content for all our readers. In order to keep things running smoothly and all the content completely free, we sometimes include referral links from our partners in some of our articles. The commissions we receive in exchange help us cover a portion of the costs associated with running a website of this size. Although we do our best to maintain our objectivity, we may promote some of our affiliate partners more often than non-partner companies, including placing them higher on our lists.
About Us
MAMBOSERVERcontact@mamboserver.com
Founded in 2013
10M+ Users
We guide our users through the jungle of choosing a reliable web host or to see if they are getting the most for their bucks - something we love doing.
CONTACT US
Useful Pages
About UsPrivacy PolicyTerms of Service
Reviews
Luminati ReviewShockbyte ReviewBluehost ReviewGoDaddy ReviewScalaCube Review
We use cookies to ensure that we give you the best experience on our website. If you continue to use this site we will assume that you are happy with it.Ok